The lifetime earnings of each new four-year college graduate will increase Georgia’s gross domestic product by almost $2 million, according to a new study from the Selig Center for Economic Growth at the University of Georgia.

The research assumed a “work-life” lasting an average of 40 years per individual who earned a bachelor’s degree on top of their high school diploma and calculated the additional economic benefit to the Georgia economy to be $1,992,065 over that span.

“It’s well known that having a college degree increases someone’s earnings, but having a degree also benefits the economic prosperity of the state,” said Alex Hill, a senior research analyst at the Terry College of Business.

“This research shows policymakers and decision-makers how having more degree holders in the population benefits the entire society economically. Employers will have a more productive workforce, profits should increase and tax revenues should rise.”

Breaking down the economic value of a bachelor’s degree, about 61% of its value goes directly to the college graduate, while 39% accrues to the graduate’s employer, their community and the state, the study found. 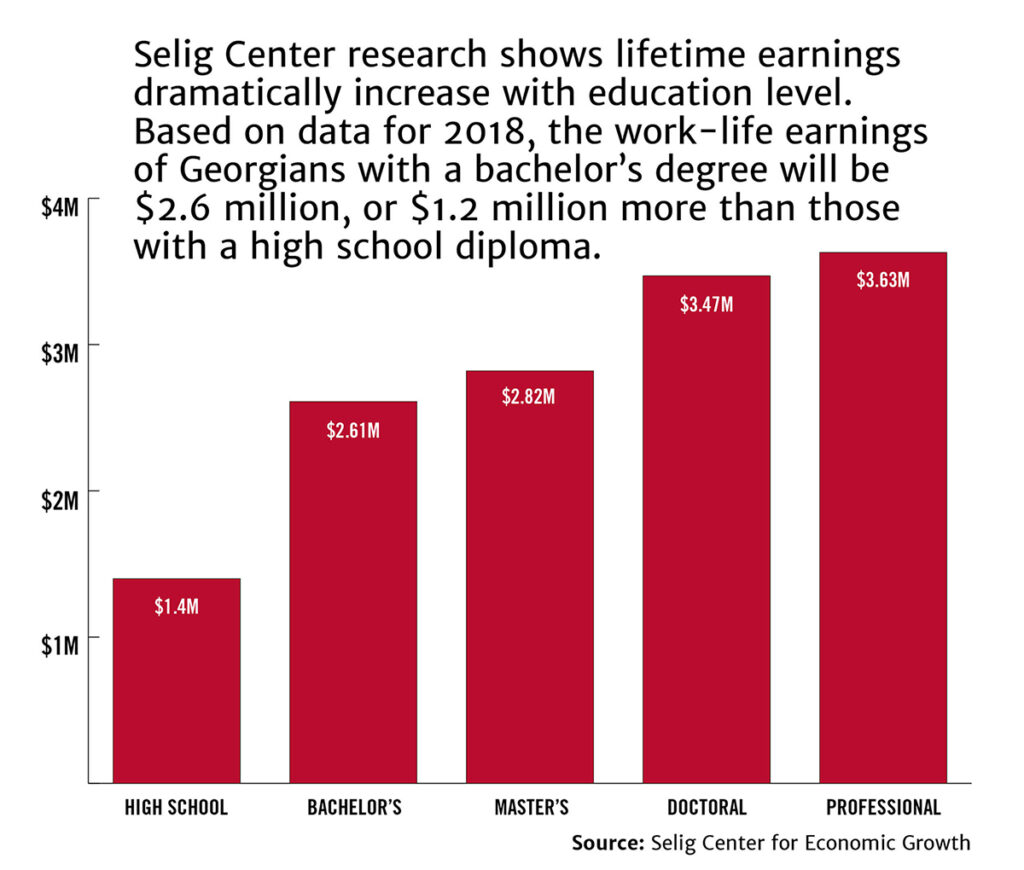 “The shared payoff bucks the argument that funding need-based financial aid at the state level only benefits those who go to college,” said Jeff Humphreys, director of the Selig Center. “Increasing postsecondary educational attainment in the state would boost Georgia’s GDP.”

Hill and Humphreys used data from the U.S. Census Bureau’s 2018 American Community Survey to calculate the current value of higher education in the U.S. and Georgia. The research, which was supported by a grant from the Bill and Melinda Gates Foundation, not only looked at the overall economic impact of college degrees in Georgia but also the personal impact.

“The payback ratio for completing a bachelor’s degree in Georgia is 12-to-1,” Humphreys said. “It cost, in real numbers, about $100,000 to get a bachelor’s degree and the payoff in additional lifetime income is about $1.2 million. Twelve-to-one is a pretty good return on that investment.”

The 2018 survey, which is the latest data available, shows 33.4% of adults in Georgia have a bachelor’s degree, compared with 34% of adults nationally.  If Georgia were to increase the percentage of adults with bachelor’s degrees just to the national rate, it would have added $1.7 billion to the state’s economy in that year. Increasing the percentage of bachelor’s graduates to 40% would have increased the state’s 2018 GDP by $18.2 billion.

The economic impact of a bachelor’s degree on lifelong earnings is slightly more advantageous in Georgia than the rest of the country, Hill said. Four-year degree holders in the U.S. can expect to earn about $1,195,015 more in their lifetime than high school graduates, slightly less than the $1,211,615 earnings premium seen in Georgia.

Humphreys said the finding suggests there aren’t yet enough bachelor degree holders in Georgia to meet employers’ needs across the state.

This Selig Center research article is part of a larger study, titled “The Power of Potential: Advancing Georgia’s Economic Future through Postsecondary Education,” published in December 2019. The co-principal investigators, in addition to Humphreys, were Charles B. Knapp and Gregory C. Wolniak of UGA’s Institute of Higher Education.